«Hay agua caliente». There is hot water, she screams. People are talking in their native tongue. That is how I woke up almost every day. I jump out of the bed because I know that is how I can outrun any negative thought that tries to catch me. Three buckets of hot water, heated on a wooden stove by the two women. Naked we «shower» – the hot water vaporates from our body into the morning sun which shines through the surrounding trees. Yes, the shower took place outside. A cup of hot coffee, eggs, beans and a handful of tortillas heavier we would walk towards our rooms, pick up the machines and walk towards the clinic building. How many people were there today? 15, ok. We will be busy. Six to twelve hours we will stay here, run from machine to person, person to coffee to bathroom. Lunch, more treatments. And after treating 50 to 60 people, we would refill the stomach with eggs and beans and many tortillas before heading to bed, sleeping with bedbugs and iron pinching ones back. Yes, these clinics are tough, exhausting and not everyone’s type of flavor. But they for sure are an unique adventure and one of the most fulfilling things I have ever done in my life. «Utz Utz»! Very good – indeed. 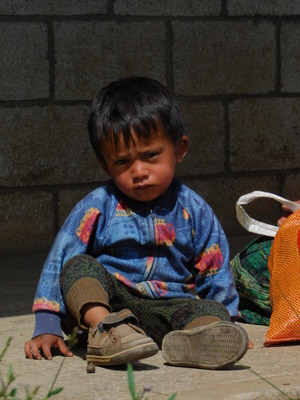 October 17th. After we talked to Rosalina Tujuc back in early May about setting up a clinic in October, we didn’t hear much for about 4 months. She had a severe foot infection, probably due to a spider bite, which made her unable to walk for a couple of months. After not hearing from her until October 15th we thought no clinic will happen. But right when we were having lunch with friends, talking about setting up a clinic in the city, she called. Out of the blue. Everything was organized, they’d come the and pick us up at 1 pm the very next day. Oh boy. Quite surprised we had to cancel all the treatments that were planned the next days and clean the house, clothes, the fridge and pack our stuff. Lucky enough, that was the night our hosts decided to party until 1 am in the apartment.

The next day, we were all set and ready to go at 1 pm. However, Rosalina and her friends barely know the city and were in the wrong zone. After many calls they found our exact location (notice that Rosalina only has a «frijol» – a phone from the era before the «smart» ones with google maps) and at 4 pm we finally hit the road and right into 2 hours of traffic to just get out of the city. Another 4 hours through the mountains all the way up to Quiché. This area is magic – corn fields, pine tree forests, small villages and towns. We stay in one of those typical little guatemalan villages right next to a typical guatemalan town with its churches, countless tiendas and its markets. This beautiful town we stay at I would say that about 90% or more of the people living here are indigenous. Most of them work in the fields without machinery, selling their crops that they don’t need for themselves on the market, making a basic living. But yes, they are poor. Very poor indeed.

At 7.30 am the first people showed up, even though the clinic wouldn’t open before 9am. And while they were sitting on the floor on their towels most indigenous people carry with them, we headed into the kitchen to eat some soup – and, unexpectedly, freshly harvested milk from that one cow that lives here. After a good cup of coffee and a healing laughter about the cat doctors cough due to the rats fur that bother his lungs, we started to set up the clinics. Of course, we don’t really eat rats, and if we would, we’d probably peel of their fur first, as we are so blessed to have thumbs to do work like that. But as a doctor once said «the best medicine is a good laughter» we try to be an example of that.

The clinic started easy and relaxed. There were about 10 people ready to get treated. As we have done clinics before, we learned how to set things up. First, they would go and get diagnosed with the spooky2. A general quick scan of 7 minutes goes through almost 2 million frequencies at once. Whenever the machine detects a certain „abnormality“, it stores it. After 7 minutes the machines throws out the highest pitches and – depending on the range of divergence it tells you what the illness is. Then the doctor picks out what treatments follow next. They either go to the magnet pulser, the other spooky2 machine or one of the RSG2. In some cases they go to the inhaler. For example if someone has high markers in the 100k to 800k Hz frequency range, it can be read as a sign for cancerous cells and we then accordingly treat them with various machines. And so we worked from 9 am until 1 pm. We treated around 20 people, but as so much is going on, it could as well have been 30 people.

After a quick lunch, we headed out to town to visit two families that belong to this group. Which means, packing the machines, walking to the next street (5 minutes), taking a bus into town and from there we would take a unique way of transportation; we would sit on the back of a truck that just loads up people on the way from town to town. Yes, we are in the third world, we are in adventure land. But this keeps my swiss mind – which is used to people bitch if the bus leaves two minutes late – busy and eases it at the same time. And I can tell you so much: a ride in one of those pickups might not be smooth for your bones, but boy I laugh way more than sitting in a train back home. One hour and many many bumps later we arrived on top of a hill, another small village. While they treated an elderly man that lost his ability to walk due to a stroke I went into a small internet coffee shop, as I had to fix some crypto currency related stuff that was due. One hour later, we jumped onto yet another truck and off we went, another 15 minutes through amazing sceneries up the hills. Trees and woods,more cornfields and working people along the way, small huts in the distance between greens and rivers following their path down the hills.

We arrived – we were basically in the middle of a field. To the left there were a few houses. And it couldn’t get simpler. The huts are made of clay mixed with hew. The floor is simply mud and just as nature built it. We passed pigs in a wooden box and chickens running among our feet – through a small corn field and into an interior space with many huts surrounding. We entered into one of those simple huts where we started to treat a woman who suffered from a cold, no energy, depression and parasites. Tired but still positive, we treated her, her sister and her husband, who is an alcoholic. We told them that aloe vera can help with alcohol addiction – the others we told the same same, magnesium chloride and cinnamon and cloves tea. Some two hours later, it was already about 7 pm when we left the place. The main patients sisters son is becoming a doctor and maybe we can teach him how to use bio electric medicine so he could set up a clinic here where he could treat people with these machines. As we left, it was already dark and raining. So we hop back on the back of the truck and they covered us with a big piece of green plastic under which we would sit and hold on to the side of the truck while we drive back to the small home village, passing all the turns, fields and holes in the street. So there we are, Rosalina Tujuc, who just refuses to take a break from helping the poor (she got up the next day at 4 am to go to Chimaltenango to talk to the major about a complaint – people stole trees from their sanctuary – and later to the city), Kyle, Kiya, two helpers from the clinic, the drivers son and me. A long (but dry) 90 minute ride later we arrived back home, where a with much love prepared food on the wooden stove was awaiting us.

Our first day was long, intens and tiring, but very fulfilling and inspiring. After treating people for free for the whole day, my heart is filled with gratitude. And after so much work the basic dinner of tortillas, beans and eggs with a cup of coffee couldn’t taste any better! I swear, cooking with real wood seems to make the food happy – it just tastes way better. We sat in the kitchen with the two women and the kid that take care of us, we talk about the day, the cat doctor makes some more jokes. They eat with us, happy that we enjoy the food.

Soon later we tell them good night, it is about 9 pm. We head to our room, I read some stuff, happy, to have some quite time for myself, enjoying to learn more about fingerprint analysis. There is barely any signal up here, so I can’t really scroll through some social media app, which probably isn’t that bad after all. I hear the wind, some cars in the distance. I call it a day. See y’all tomorrow.

The oneQclub is not an officially registered organization. All our activities are privately organized and everything published under the name „oneQclub“ is privately owned. We can not be held responsible for the improvement of peoples health we treat. The products we talk about are not intended to diagnose, treat, cure or prevent any disease. All information presented here is not meant as a substitute for information from your healthcare practitioners. All information here is only for informational and research purposes. We are a privately organized and financed group of people doing research towards their own interest with no affiliates.

If you decide to work with the machines or practices mentioned on this website, you do it in your own responsibility and we can not be held accountable. Thank you for acknowledging our statement.