7.30 am, shower, breakfast. Today there were already another 20 people when we got up. It is sunday, probably gonna be a busy day. Kyle is in town due to helping Kyia (a dear friend who visited us for over 2 months), so as of right now it is just the doctor, Steven, our guatemalan helper from the departemnt of psychology of the university of san carlos. After a nice breakfast, have a tamales, two eggs and a bit of beans with tortillas and spice, we head right into the clinic. 8.38 am, first patient is here, let’s go!

8.58: we are treating the second patient, while we try to explain the first one about how bad the phone antennas are. She lives in the city and close to one of these electric towers that broadcast electromagnetic frequencies for WiFi and cell phone connections. People close to these towers seem to be more affected and have more cancer. No, this is not based on a specific research but it is more we saw throughout the times and visits we did all over this country. And we all know, that WiFi and electromagnetic frequencies can affect us. So we intend to teach the people here about Orgonite, a material that seems to restructure the disorganized electromagnetic energy in a way that it is beneficial for human bodies. If you like to learn more, check out Wilhelm Reich, another sad story in human history that way more people should be aware of.

Today is sunday and hence many people have the time to get here. They are from all over the place, some even came from the city, which seems rather odd, but we treat them all. Women are weaving hats on the porch while they are waiting. And boy am I glad we have a psychologist that actually speaks perfect Spanish. It really helps us out quite a bit.

10.38: A family of three sits in front of me. The kid suffers from a fungus infection, hence we give him some colloidal silver to drink. She herself has been her two days earlier, so we just put her back on the magnet pulser, she might have cysts. She complains about pain in her lower abdominal area (pic.1)

12.45: There have been up to 30 people so far. A young kid with 39.4° C fever is on the blood purifier machine (donated from SOTA) (pic.4). In the meantime, there is 4 more people waiting for a diagnose. The woman with very serious diabetes left after we put her on various machines for about 90 minutes. The mother with 7 kids left as well – she simply needs magnesium, some colloidal silver and Moringa for nutrition. The family we treated up in the mountains came down to visit today, so right now we diagnose them. I guess in another hour it is time for lunch. I had a good three cups of coffee.

14.00: We treated the kid with the fever. The diagnose: parasites in the brain and close to a appendicitis. Now, I know this is a computer diagnose based on frequency feedback, but considering the major pain the kid felt when putting pressure on his lower left abdominal location is a strong signal for such an appendicitis. In the meantime, more parasites, more candida, some diabetes. But now was the time where we would go for lunch. We had to ask some people to leave so we could close the clinic for 15 minutes. But often that is exactly the time where somebody asks for the 7th time how to boil the water, how to take in the medicine. Telling them to check their receipt seems not to address the issue and it is those moments where I feel a strong sense of over-tiredness and frustration. So today, I just told one that I don’t know as I don’t know her diagnose. She didn’t get it, I didn’t care in that moment. I just refused to talk. Of course then I feel a bit guilty, but it just takes its toll, to write the same thing 30 times, explain the same stuff over and over, when being hungry and tired. Anyways, the food helped.(pic.lunch)

15.05: four people are watching interested a video about the benefits of colloidal silver. They all get a bottle, and I hope they won’t ask me what it is for. But one of the woman is very interested. She is our translator and was wondering if they could get one of those machines in order to make some silver. Now would that be a good way to spend 500 USD? It would help countless women, dads, kids in this area that could then afford a natural antibiotic that treats them efficiently from acne, cancer, candida, enzemas, allergies, gastritis, bacterial infections, etc. Now you can start imagine, these 500 USD could safe a dad from diabetes, a mother from serious parasite infection, a young mother from a mold infection and kids from tapeworms, parasites and candidas. Think about it, your 500 USD could save the dad of 7 kids from parasite infections, maybe a death, and thus keep their main source of income intact. Just saying…

So up until 2 pm I ran around – and whenever I could, I would take pictures. Information about colloidal silver is running on the laptop outside where people were waiting, somehow everyone starts to weave or eat corn that came out of the blue, kids eating lollipops, grandmothers taking care of their grandchildren while their moms are getting treated. And so we help the young, the old, the weak and the strong, one after another. It is a peaceful but energized happening with many laughter and talks. This and their gratitude pays back for all the stress, the seemingly never ending repeating cycles of writing similar receipt and explaining the same thing to the same person 5 times, the noise and the smells. Knowing that they see this as a gift from heaven that has heard their praying provides me with a bigger gift than many other things people might assume happiness being captured with.

While we play some 432 Hz music to chill the clinic out a bit, I treat two people with the spooky2, the general universal frequencies. Yes, as we believe in frequencies I personally as a former music teacher do believe that music does have effect on our body and emotions – as it mainly is frequency too, 432 Hz being a more harmonious frequency than 440Hz. In the backroom, the silver machine bubbles, the doctor explains to avoid bread due to fungal infection. A kid is crying, my patients listen carefully to what the doctor says. Our helper translates, I fill a bottle with silver, while feeling the urge to just lie down for a second. It was a quite stressful day. White flukes shows up again, it goes into the intestines, the liver, the pancreas, the brain. So yes, no more bread, no peanuts, no alcohol. The silver will take care of it. Next diagnose please.

16.28 pm: the last person sits on the magnet pulser, one last woman gets diagnosed. Many women that showed up in the afternoon are suffering from fungal infections, – „flujo blanco“. So we tell them to better not eat bread no more, as mentioned here already. It is somehow mentally draining, so I kind of loos the overview of what I say, write, whom I talk to. After alll, I saw about 60 new faces today, so yeah, smoke is coming out of my ears. I hope to get some more sun, enjoy the forest close by and just chill. Listen to the birds singing, if there is some around still. Maybe I also should drink some water.

18.18 pm: Instead of lying on the bed I thought of going for a walk by myself. But somehow the universe sent me some kids to talk with. Louring at me through bushes they made noises. „Ello“. I initially wanted just to be on my own in the woods, but it wasn’t meant to be. So I gave up on the idea of having a quite walk for myself and just gave them silly answers to questions. They laughed a lot. «What is name?» – «Peter John Franz Albert Gregoire Justin Jonathan Markus». Laughter. And so did I. I asked them if they’ve seen those spiders in the woods, I prefer them cooked with butter. They all yelled – who would eat such things. We walked through a beautiful area – pine trees, little houses and huts, an amazing sun set with birds heading east (pic.below). And while Kyle joined us and I explained all the names they wanted to know in English (so they could tell me who of their friends is in love with whom in English) the sun painted the most beautiful oranges and reds between the trees. After a nice half hour walk we got back. They now know how to say Kimberly and Julian as well as goodbye in English. And I had, after all, a much better experience than I expected, then instead of a walking alone through the woods thinking thoughts I ended up having a really fun time with making those kids laugh and them making me laugh. Because after 3 minutes I completely forgot about the stress and the whole clinic, and that was the whole idea of the walk anyways. So yeah, thank you universe, you really seem perfect, if one knows to look at it in a certain way. 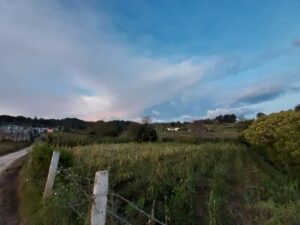 The oneQclub is not an officially registered organization. All our activities are privately organized and everything published under the name „oneQclub“ is privately owned. We can not be held responsible for the improvement of peoples health we treat. The products we talk about are not intended to diagnose, treat, cure or prevent any disease. All information presented here is not meant as a substitute for information from your healthcare practitioners. All information here is only for informational and research purposes. We are a privately organized and financed group of people doing research towards their own interest with no affiliates.

If you decide to work with the machines or practices mentioned on this website, you do it in your own responsibility and we can not be held accountable. Thank you for acknowledging our statement.